Whether we’re shielding our skin from the sun or protecting it from the aging effects of gravity, sometimes it feels like our complexion is under attack from all sides. And with the surge in screen time due to the pandemic, we can add one more aggressor to the list: blue light. This type of harmful light comes at us from multiple sources - not only does blue light come from the sun but also the screen of your cell phone, computer, TV and the majority of light bulbs. In short, our skin is exposed to a potential source of damage for a large part of your day, every day. Here’s all the information you need on whether artificial blue light is harmful and what you can do about it. 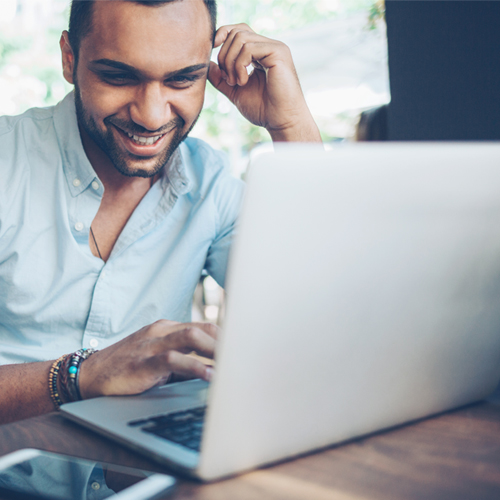 What Is Blue Light?

Blue light is simply light on the blue end of the visible light spectrum, falling within the wavelength of 400 to 450 nanometers. This is a short wavelength which has a higher energy output and unfortunately, can cause greater damage to the skin. As already mentioned, blue light is not only found in sunlight but just as importantly, it also emits from the electronic devices now integrated into most people’s daily lives. According to Eminence Organics International Trainer Brian Goodwin, we are “typically exposed to blue light for over 13 hours a day between your cellphone and computer screen.” With the long, daily duration of exposure and the high potential for skin damage, blue light could be the next enemy number one for our skin health.

What Do We Know About The Dangers Of Blue Light?

Blue light first started receiving a bad rap when people noticed its link to poor sleep quality. Late night hours in bed scrolling through your phone resulted in restless nights, and scientists soon discovered why. According to Harvard Health, blue light at night suppresses the secretion of melatonin, the hormone that affects the circadian rhythms that schedule your sleep/wake cycle. With a sleep cycle out of whack, many people don’t get enough sleep, leaving them open to health problems like depression, diabetes and cardiovascular problems.

A restful night is not the only thing at risk. Blue light exposure to the eyes was one of the other potential problems that professionals first pinpointed. The cornea and lens don’t filter out blue light, so it goes right to the back of the eye. And a University of Toledo study discovered that blue light “transforms vital molecules in the eye’s retina into cell killers which damage the retina,” resulting in conditions like macular degeneration. Although experiments were only conducted in a lab setting and not on eyes, the potential for harm to eyes from blue light appears problematic.

Why Is Blue Light Harmful For Your Skin?

With blue light making waves in the area of sleep and eye health, it’s no surprise that potentially harmful effects have been discovered for skin health as well. Unlike other environmental stressors for the skin -  like sunlight and UV rays - there’s no heat, no burn. However, don’t let the lack of immediate effects fool you. Visible light, especially in the blue wavelength, has become a hot topic in skin care, as there is mounting evidence that supports its contribution to photo-aging, including wrinkles, worsening skin laxity and hyperpigmentation.

Visible light, especially in the blue wavelength, has become a hot topic in skin care, as there is mounting evidence that supports its contribution to photo-aging, including wrinkles, worsening skin laxity, and hyperpigmentation.

Academic studies like the Journal of Investigative Dermatology in 2010 found that exposing skin to the blue light we receive from the sun caused more pigment, redness and swelling than when the same person’s skin was exposed to similar levels of UVA rays. Supporting this is a 2015 study published in Oxidative Medicine and Cellular Longevity, which concluded that exposure to blue light could stimulate the production of free radicals in skin, a major cause of premature visible signs of aging. The free radicals generated create unstable molecules, leading to inflammation which attacks the cells.

So, if we know that blue light is a danger to our skin, how does it actually cause harm and what are the effects? When blue light stresses the skin, it reacts by producing inflammation, leading to swelling and redness. Also, free radicals are produced which harm the skin by damaging the DNA and resulting in weakened collagen and elastin. With compromised collagen and elastin, the skin becomes uneven and forms lines and wrinkles. Free radical damage also causes hyperpigmentation, leading to more signs of aging like dark spots. In summary, Brian outlines our body’s alarming reaction to blue light: “The skin responds by immediately protecting itself with inflammation which gives signs of swelling and redness … This sets off a chain of other events that presents symptoms in the skin such as hyperpigmentation and a quicker breakdown of collagen and elastin.”

So, how do we protect our skin if we’re sitting in front of our devices for the majority of the day?

Researchers have discovered that concentrated natural cocoa seed extract shields the skin from blue light damage because it helps block the skin's blue light receptor cells. A decrease in cellular activity in these blue light receptors lowers free radical damage and boosts collagen and elastin production in the skin.

This unique extract contains three beneficial, naturally-occurring components. These are peptides, saccharides and antioxidants, which address the negative effects blue light creates, such as collagen breakdown, elastin degradation and hyperpigmentation. Peptides found in the cocoa seed extract are a chain of amino acids that help protect the skin from blue light stress, as well as boost collagen and elastin strengthening. Polyphenols are groups of organic compounds that have antioxidant benefits for the skin, protecting the skin from the free radicals created by blue light. Lastly, saccharides are sugars that attract water into the skin, they help prevent as well as treat the potential dehydration caused by blue light exposure.

At Eminence Organics, we have formulated a range of all mineral SPF moisturizers that is silicone free, employs non-nano zinc oxide technology and helps with environmental stressors. From our latest range of SPF moisturizers, one in particular helps with the look of skin exposed to blue light - the Lilikoi Daily Defense Moisturizer SPF 40. This lightweight daily moisturizer is formulated with cocoa seed extract, satsuma mandarin peel and SPF 40 all mineral protection to help skin exposed to blue light stress and pollution.

What do you find most alarming about blue light? Let us know in the comments below or share with us on social media. If you'd like to learn more about our SPF moisturizers, visit our Spa Locator to find your nearest Eminence Organics Spa Partner for more information.

This article was originally written in March 2019.