Even when you fancy yourself smart about skin care, you may occasionally cross paths with a product ingredient you’ve never heard of that comes with a whiff of exoticism. Case in point: neroli oil. Eminence Organics uses this ingredient in several of our award winning and perennial best selling products, yet what do we know about it? Let’s take a closer look and find out exactly what neroli oil is, its surprising origins and its benefits in organic skin care.

What Is Neroli Oil?

Who would have thought that this glamorous and mysterious ingredient is actually derived from the humble orange? Neroli is the prettier name given to the bitter orange flower, a close relative of the common navel orange. As the name implies, unlike navel oranges, bitter oranges are just that - bitter. In fact, they are commonly called “marmalade oranges” as they are historically used to make this tart British spread. Much like rose oil, neroli oil is distilled from the bitter orange flower via hydrodistillation (a.k.a. steam distillation) where the flowers are carefully steamed to release the fragrant oil.

The name “neroli” came about after crusaders first brought the brightly-colored bitter orange from Asia to Europe. It was named after Anna Marie Orsini, the 17th century Princess of Nerola, Italy, who used it in her bath as a perfume and to scent her gloves. Anna popularized the use of neroli in beauty, but prior to her, neroli oil was a highly traded commodity used in ancient Egypt, traditional Chinese medicine and even to help fight the plague.The scent is often cited for its use in aromatherapy as it can reduce the levels of cortisol in the brain (monq). 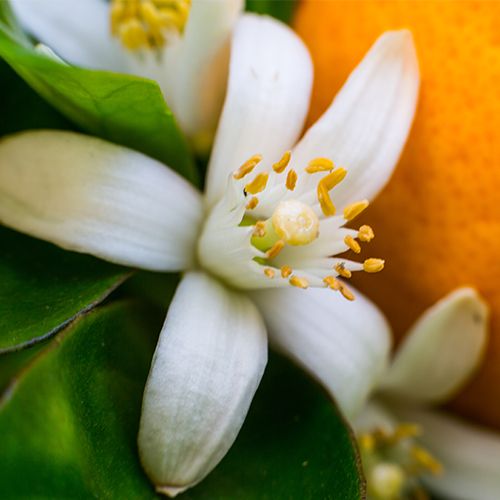 What Are The Benefits Of Neroli?

In addition to its irresistible orange blossom scent, neroli oil can also be used in skin care. According to Patricia Davis, author of Aromatherapy: An A-Z, neroli oil stimulates skin cells to regenerate, giving it anti-scarring properties. This makes neroli a fantastic ingredient to rub on stretch marks, dark spots and scars.

Along with its regenerative qualities, neroli oil is also antiseptic, antibacterial, anti-inflammatory and pain-relieving.This makes it useful to treat pimples and acne and reduce the redness associated with breakouts. Solidifying neroli as a skin care saviour, it can also be used to treat oily skin, reduce fine lines and hydrate all skin types.

How Do You Use Neroli Oil For The Skin?

There are many ways to apply this exquisite oil to the skin, and as it works beautifully on an array of skin types, neroli is a wonderful option for everyone. Because of its anti-aging properties, we chose to create two products that gently minimize the look of fine lines and wrinkles, our Neroli Age Corrective Eye Serum and Neroli Age Corrective Hydrating Mist.

Winner of Best Eye Serum in the Spa & Wellness MexiCaribe Awards 2017, the Neroli Age Corrective Eye Serum hydrates the look of delicate skin around the eyes. Along with coconut water and Swiss Green Apple Stem Cell Technology, neroli oil fights the visible signs of aging around the eyes, including fine lines and crow’s feet. This award winner isn’t short on glowing reviews either. “Bobbie” gives this serum five stars, saying:

“When I first bought this I was looking for something that would help with lines. What I got when I tried this was amazing. It really tightens skin and is light. Doesn't cause your eyes to get goopy by seeping into them like some others do. It can go under makeup and is wonderful. You won't be disappointed with this product and it lasts quite a while.”

With one fragrant spritz, our best-selling Eminence Organics Neroli Age Corrective Hydrating Mist can tone and smooth the skin. Featured in People StyleWatch, as a “Trending Now” skin care product, this refreshing mist is a wrinkle-busting must have. Neroli oil, as well as Natural Retinol Alternative and Swiss Green Apple Stem Cells, immediately gives skin the appearance of firmness and tightness. This stellar skin care product leaves the complexion looking vibrant and revitalized. 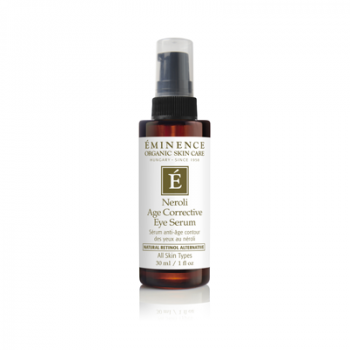 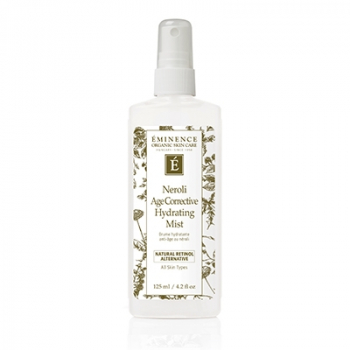 How would you describe the alluring scent of neroli in Eminence Organics products? Let us know in the comments below or on social media.