The 74th Golden Globe Awards roll out the red carpet this Sunday for Hollywood’s top acting talent, including celebrity Éminence fans Thandiwe Newton and Riley Keough. With her key role in new HBO hit Westworld, Thandiwe was nominated for Best Supporting Actress in a Television Series, while Riley Keough scored a nomination for Best Actress in a Television Series for The Girlfriend Experience. As a major part of the awards season, the Golden Globes is an exciting spotlight for these two celebrity fans.

A long-time devotee of our skin care, Thandiwe first wrote about her Éminence must-haves on her blog, ThandieKay.com. Detailing her personal struggle with problem skin, Thandiwe recommends exfoliating with our Strawberry Rhubarb Dermafoliant: “I use the gorgeous ‘Éminence Strawberry Rhubarb Dermafoliant’ – completely natural and organic, smells divine and is gentle enough (but properly effective) to use morning and night.” She also touts our Bright Skin Licorice Root Booster-Serum for brightening the look of skin affected by problem areas. She exclaims: “This stuff rocks!” 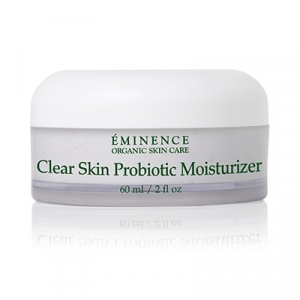 Rising star Riley Keough also turns to Éminence products as an effective solution to problem skin. Sharing her beauty secrets with Vanity Fair, Riley reveals that our Clear Skin Probiotic Moisturizer is an essential part of her skin care routine. Always looking spectacular on Starz’ The Girlfriend Experience, Riley shows off both her gorgeous skin and acting chops in this new series.

We’re thrilled to see two fans of our skin care celebrated at the Golden Globes 2017! Best of luck to both Thandiwe and Riley and congratulations for their well-deserved nominations.