We were incredibly excited to see ourselves featured everywhere in ISPA’s December issue of Pulse magazine. What an inspiring way to capture the memories of this year’s ISPA Conference & Expo and our company president Boldijarre Koronczay’s ISPA Visionary of the Year Award. If you have a chance to read ISPA’s December magazine, make sure you check out these sections:

WE'RE ON THE COVER!
The cover photo of Boldijarre’s session at the conference is a literal snapshot of the spirit of ISPA. The image of guests wholeheartedly enjoying the audience participation at Boldijarre’s presentation captures the camaraderie felt throughout the conference.

CHAIRMAN'S MESSAGE
ISPA Chairman Michael Tompkins devoted his message to his and Boldijarre’s crowd-wowing performance which involved dapper fashion choices, impersonators and an entertaining dance. As Michael mentioned, joy and laughter were recurring themes and the performance brought both to the hearts of all attendees.

VIDEO FLASHBACK
Hit the replay button on Michael and Boldijarre’s performance! ISPA linked a video of the full entertaining act from their magazine. 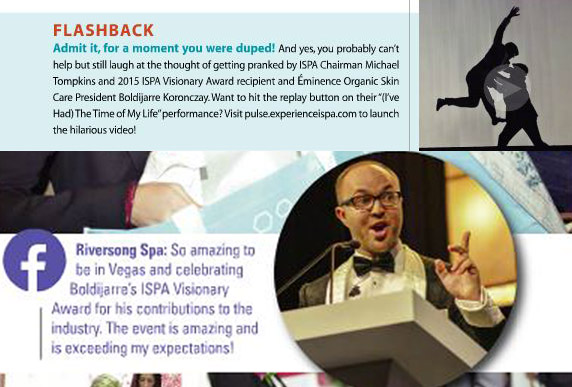 Much appreciation to Pulse for sharing an inspiring event which will be memorable for years to come.