In addition to being successful actors, philanthropists and all around handsome heartthrobs - what else do Channing Tatum, Mark Ruffalo and Hugh Jackman have in common? They’re all great dads. From watching their children’s soccer games to attending parent-teacher meetings, these three celeb dads share the same responsibilities as many other fathers around the world. And, like all great fathers, they do their very best to be positive role models so that they can raise happy, healthy and well-behaved kids.

In celebration of all of the superstar dads out there (not just the famous ones) we thought we’d share how Channing, Mark and Hugh balance their careers, personal life and fatherhood - and still keep looking better with age.

As a famous actor, dancer and the Sexiest Man Alive (according to People Magazine 2012) - it sounds like Channing Tatum has a lot going on. However, if we had the opportunity to ask him what his greatest accomplishment in life would be - we have no doubt that it would be being a father to his daughter Everly (born May 31, 2013). 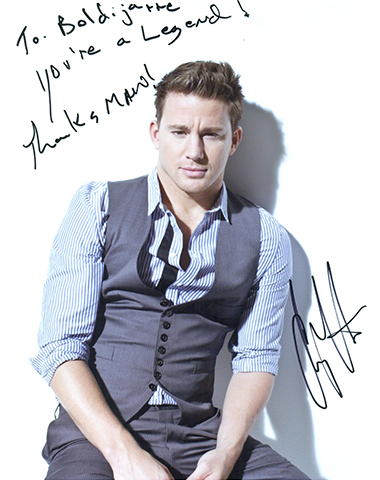 What makes him a great role model?

Channing is continually active with his charity work, supporting cancer and AIDS & HIV research as well as advocating for the environment. In 2012, Channing and his wife Jenna were nominated as a “Do Something Couple of the Year” by Do Something, a nonprofit that encourages young people to give back to their communities (Huffington Post).

What makes him a superstar dad?

Even as a new dad – Channing is already shaping up to be a pretty amazing one. In a number of interviews, he reinforces the fact that he has high hopes for his baby daughter and will continue to encourage her to follow her dreams and become the person she wants to be. 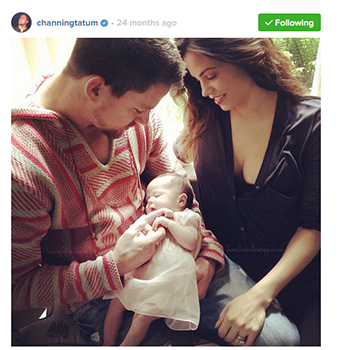 We can’t take credit for his genetics, muscular frame or athletic physique - but we’d like to think we can take some credit for his great skin. Channing recently received a facial from our President, Boldijarre Koronczay where he enjoyed a variety of our products including our Stone Crop line (Stone Crop Body Lotion, Stone Crop Gel Wash & Stone Crop Hydrating Mist) our Blueberry Detox Firming Peel, Bamboo Firming Fluid, Facial Recovery Oil, Monoi Age Corrective Night Cream for Face and Neck, and our Strawberry Rhubarb Dermafoliant.

Most recently known for his return role as Bruce Banner (The Incredible Hulk) in Marvel's The Avengers: Age of Ultron, this famous dad (and Academy Award nominee) doesn’t simply identify himself as a successful actor. According to Mark’s Twitter profile -“ I'm a husband, father, actor, director, and a climate change advocate with an eye on a better, brighter, cleaner, more hopeful future for all of us.”

What makes him a great role model?

Mark is a huge environmental activist and puts a lot of his passion and resources towards advocating for clean, sustainable and renewable energy solutions. To add to his earth-friendly resume, Mark recently launched Water Defense, a nonprofit that takes on fracking and other extreme or unconventional methods of energy extraction (MotherJones.com).

What makes him a superstar dad?

As a father of three children, Mark and his wife (actress Sunrise Coigney) recently moved their family from busy L.A to a remote area of upstate New York in order to give their children a more laid back and private life (Men's Journal). His children are also his biggest fans. In an interview with ET, Mark commented that his teen son has been dealing with “major Hulk fandom”: “My son’s hair is dyed green right now,” Ruffalo explained. “His clothes are green, his hair is green. I’d like to think it was because of me.”

So what do Mark Ruffalo and Eminence Organics have in common? Green values (yes, pun intended for the Hulk actor). As a nature-lover and environmental activist, Mark chooses our products including our Stone Crop line (Stone Crop Gel Wash & Stone Crop Moisturizer) which keeps his skin bright, hydrated, and revitalized after long hours of filming and parenting.

Most of you know him from his long-running role as the lethal “Wolverine” in the X-Men films, but Australian-born actor, producer, and singer Hugh Jackman also chooses roles that show his gentler side. For those of you that have seen Hugh as the courageous and protective father-figure, Jean Valjean in Les Misérables – it’s easy to see how this real-life father has a natural parental instinct on- and off-set.

What makes him a great role model:

In addition to his successful acting career, Hugh supports a number of charities and is also co-founder of Laughing Man Worldwide – a not-for-profit organization which helps entrepreneurs in developing countries around the world start their own businesses. 100% of Laughing Man Worldwide’s revenue goes back to education, community development and new business development.

What makes him a superstar dad:

This down-to-earth dad knows how to embrace the simple things in life. When it comes to vacationing with the kids, Hugh opts for camping trips. For him, simply spending time with his family is the “best thing in the world.” (Dad.info)

According to Hugh - “The things that I really cherish are the everyday moments, like sitting around cooking pancakes together on Sunday morning, or getting home after a tough day and my kids come up and give me a hug and remind me what's really important” (IMDb).

Chosen as one of People magazine's "50 Most Beautiful People in the World" for 5 years in a row ,(2000-2004), we’re honored to know that another one of the world’s most beautiful people uses Eminence Organics. While on the set of X-Men – Hugh treated himself to some of our products. 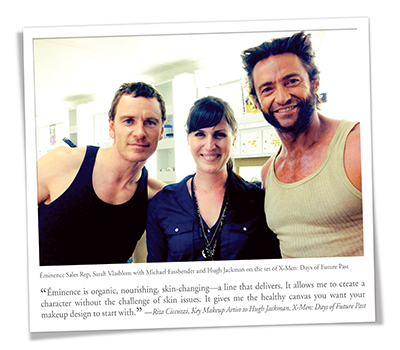 For dads like Hugh who come from a sunny climate like Australia's, the SPF protection factor is extra important. Having been treated three times for skin cancer – Hugh is a big advocate for sun protection. Click here to learn more about our sun care products.

Now that you have the run-through of what makes these three celeb dads tick, we’d love to hear what makes the man in your life a superstar dad. Tell us more in the comments below.